Day two in St Michaels. This year I discover that my uncle Ron’s taste beer is more sophisticated than most. Delighted, he tells me of the ales at the C Street Saloon on the main street (the one and only street in town). There is even an English-style ale there, which makes me salivate. My wife wants to spend the morning shopping with Aunt Dottie.

St Michaels’ town motto is “The town that fooled the British” deriving from a August 10th, 1813 ruse. The residents learned of a British plan to bombard the town and fort. Hanging lanterns from the trees, they tricked British gunners into overshooting the town. Dottie says the motto should be updated to read “The town that fooled the tourists.” Overpopulated with fashionable clothes shops, art boutiques and tourist crap shops, there is little much else to do. I endure the commerce until lunchtime at the pub.

The C Street Saloon sits on the corner of St Michaels Blvd and Carpenter Drive. Like all the shops in the town the pub was formerly a home (often Victorian style) converted to business some time in the 1950’s. The bar is separated from the restaurant, forming two long rooms comfortably seating about two dozen apiece. The faire is typical sea-shore pub food: fish, crab, burgers, etc.

There are two beers of note on the menu. The first being the aforementioned C St Ale, and another a Yuengling Porter. Yuengling’s lager is easy to find, but the porter is new to me. I decide to start with a mug of the ale. Ron tells me that it is actually brewed 50 miles away in Annapolis. 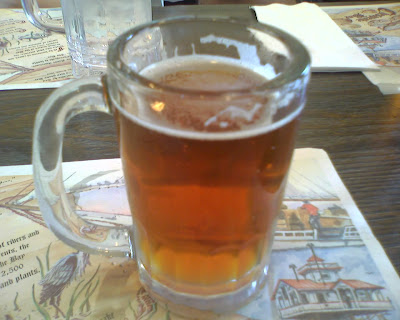 A mug of clear amber beer comes to the table. It retains a thin white head after the trip from the bar. On the nose there is a great floral hop aroma. Not much malt, but certainly noble hops. It’s cold and has a carbon dioxide bite which complements a medium bitterness. The sweetness is well attenuated leaving behind a few British malt flavors to delight the taste buds. Medium body with uncharacteristic medium-high CO2, it finished dry and bitter without begin soapy. Warm it up a little and reduce the carbonation for a great English bitter. 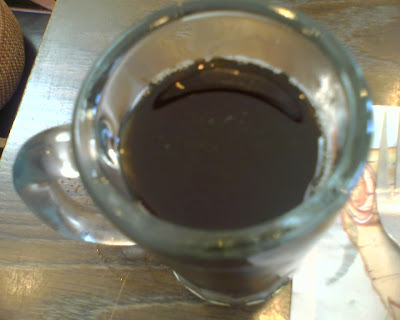 Next up is the Yuengling porter, black and opaque. A whiff reveals strong molasses, but not much else. It tastes sweet, but one sided. The hops are barely noticeable with their bitterness coming out halfway through the glass. Low carbonation, medium body. Overall, a disappointing shallow porter. I order another C Street ale.

We just arrived at my aunt and uncle’s weekend getaway (soon to be retirement) home in St Michaels, Maryland situated in an area known as the Eastern Shore of the Chesapeake Bay. A sleepy town on the surface but all around there is a quiet bustle of boutique shoppers and vacationers. The area is beautiful, my aunt and uncle’s place an exemplar of subdued extravagance.

They live on Mt. Misery Road – something of a misnomer as the area couldn’t be less mountainous or miserable, unless you count their neighbors: Donald Rumsfield and Dick Cheney own houses nearby. The back of the property, where the house sits, looks out over an arm of the bay. It is quiet, picturesque, one of my favorite places to spend time. Down on the dock the crab pots are out of the water and the tide is too high to harvest the oysters just off shore. Yesterday’s crab haul waits in the fridge.

Ron greets us and shortly pulls out a local beer by Fordham Brewing, handing me a glass. The label says “Est. 1703” on one side and “Re-Est. 1995” opposite. Looks like they have been in business for a long time. Although the beer is brewed & bottled by Southern Beverages Inc in Dover, Delaware, the recipe is from the Fordham family. 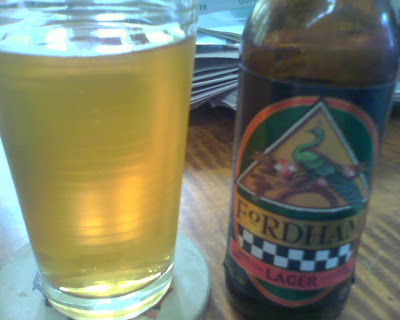 Simply labeled “Lager”, it pours a clear, rich golden color. I am able to coax a little white head to the top of my beer, but it quickly fades. Bringing the glass to my nose there is a noticeable sweet aroma. Honey flower lurks in the background giving the impression of noble hops. Like the aroma, the draught is grainy and sweet. As it rolls around a low hop bitterness comes out hanging on to the carbonation crispness. The only fault I can point to is an insufficient carbonation. Medium bodied, the finish is pleasantly bitter leaving the memory of initial sweetness.

It occurs to me that this is not simply a “lager”. Thinking for a moment, I peg it at Munich Helles. A read of the BJCP guidelines for category 1D confirms my suspicion. Not surprising that Fordham picked the simpler moniker for wider appeal, but they should be proud of the fine Helles. I might make room in my suitcase for this (with the Old Dominion barleywine). 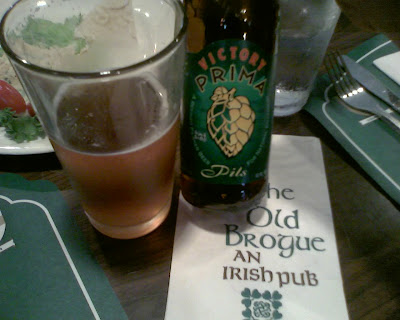 The weather report says 55% humidity, but it lies; the air feels much heavier. When we left the house, the reading indoors was 70% and I’d wager it is closer to 89% outside. A moist haze, unlike California smog, mingles high with threatening cumulous giving the sun an indistinct outline. I am escaping the ninety degree heat at one of the Washington DC metro area’s best Irish pubs – The Old Brogue. Situated in Great Falls, VA it lies a mere twenty minute walk from my grandfather’s home and stables. We drove, however. It’s hot. The pub is a typical Irish pub; picture Molly McGee’s or O’Flaherty’s. Dark wood everywhere, green accents, a tiny raised stage, and decent selection of pub beer.

I am most of the way through Magic Hat #9 and need to get a review of the previous beer down before I forget it entirely. Thirty minutes ago the waiter brought me a bottle of Victory Prima Pils. It poured a pale straw color with a thin white head smelling of floral hops. The bottle says “whole flower European hops” and I picked up citrus and spice. Unlike traditional pilsners with their subdued but palatable bitterness, Prima Pils comes at me more like a West Coast American pale ale. After returning to the house I will be surprised to find it in the BJCP’s list of commercial examples of German Pilsner. Guess I need to taste more German nobles. Although the hops are unexpected, Victory obviously took the usual route when crafting the grain-bill. It is soft and crisp. Malt character takes a back seat to this spicy hop ride. Carbonation and other mouthfeel details conform to style. Overall, the beer is good, but I wouldn’t order it again. Before I return home my palate will find a famous Victory Hop Devil. 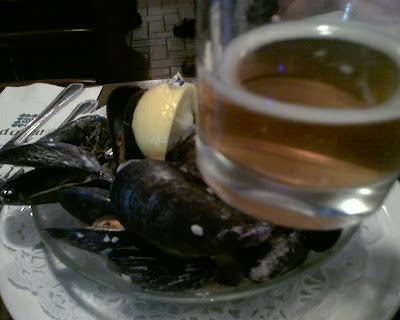 The steamed mussels just arrived. I have an inch and a half of #9 left. gulp Less than that now. A narrow ring of white head still clings to the top of the beer. “It’s on draft. It’s an apricot beer,” was all the young waiter could tell me about it. The dulcet aroma is heavy with fruit. In general, I do not detect the fruity smells of most ales. My nose is just not attuned to that scent, but it has no trouble with these ‘cots. When I peer through the beer in the dim light it appears a slightly darker straw than the pils, with an orange-pink tinge. Fortunately, this beer does not taste as sweet as it smells. It is nearly dry in defiance of a full apricot flavor with complementing hop spice like a subdued sassion. The last sip, warmed, goes down easy making for a drinkable beer. Not a style of my liking, but enjoyable. 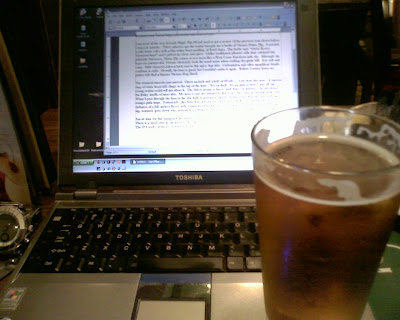 Just in time for this paragraph the attentive waiter places a Dogfish Head 60 minute IPA next to me. My wife, head buried in her iBook, has helped me make a small dent in the mussels. The IPA wafts promises of American hops and a wink of malty sweetness to my nose. The light shines through palest golden leaving you with the impression of lager rather than ale. Hops and bitterness hit my tongue. This is a great IPA. Sharp, fresh, with citrus undertones, not overpowering, makes for a good complement to the Chesapeake Bay mussels that now sit nearly finished by my laptop. While the hops grab my attention, if I concentrate I can taste the supporting malt quietly providing a backbone to the beer. Saving the last swallow, my concentration turns to the mussels. Adrienne’s battery is almost dead, she’s fidgeting now, and our waiter is quitting for the day. I am going to miss this IPA when I get back to the West Coast.

This is just the beginning. More tasting sure to come.