Weeks in advance the word went out through Craigslist, Facebook and TexAgs, trickling through emails from friend to friends. When brewday about 20 people showed to share beer, make beer, talk beer and have a good time. Three people brought their gear and we made 21 gallons of beer. I made an ordinary bitter, Ian made some hefeweizen, and a trio of brewers crafted chocolate raspberry stout.

I would say it was a great success. There was plenty of home and commercial brew going around and there was some great tri-tip off the bar-b-que. As is typical of many homebrew clubs, there was just a little bit of club business to discuss and a next meeting to decide on. Josh and Leslie volunteered their place for the next meeting and we quickly decided on May 3rd. I am pretty excited at the ease with which everyone got along and the eagerness of the group to continue gathering.

My brew-day went smoothly until the end. My kettle screen let some hop leaves by and they got clogged somewhere leaving me with half-chilled wort. What I should have done was stop the chill, disassemble my apparatus and back-flush the system into the kettle. What I did instead was to dump the hot wort into the fermenter to air cool. I had to walk the fine line between pitching yeast into scalding wort and giving infection too much time to take hold. I think I pitched too hot because it took about 24 hours to see activity from a decent starter. I would really like to get my system hard-plumbed and on a stand. 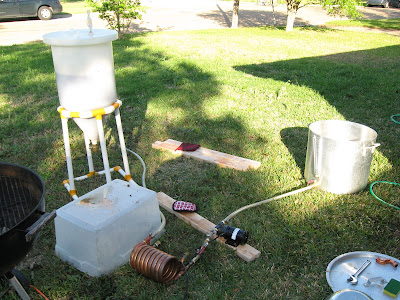 I had two new gadgets to play with yesterday. The filter worked well once I realized it would be fine if I glued the casing together instead of worrying about replacing the filter after 10,000 gallons. I also bought a “Squirrel” brand paint mixer to aerate wort. That thing whipped up a six-inch head of foam in no time, making it a great purchase.