Hello loyal readers (and others),

I started the duck-in fermentation cooler project with the goal of keeping my homebrew at a temperature appropriate for fermenting. It is mostly finished now and stands in the brew-room of my new house undergoing light testing. 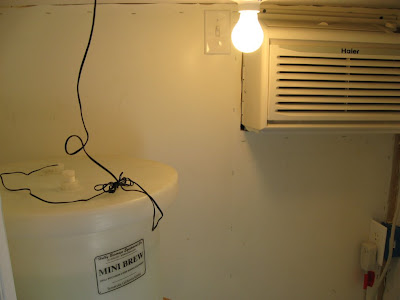 On the left is my 15-gallon fermenter with about 12 gallons of tap water and a thermometer probe. To see how long this contraption takes to get to temperature I started running the AC at about ten in the morning yesterday. Here is what the thermometer said: 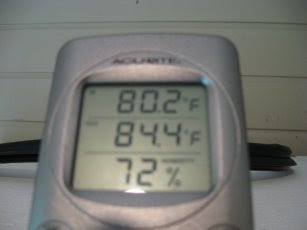 Top is ambient temperature and bottom is the water. Yep, it comes out of the tap that warm, which makes for problematic wort chilling. After 8 hours the water temperature dropped to the low seventies. At the 12 hour mark it was in the mid sixties where it stayed mostly constant. Most ales are happy in this range, so I am happy. The ambient temperature was in the high seventies. Initial tests showed that it could hold 65-ish° without a full fermenter even in 90° F weather, giving me a 25° drop under ambient. I am using the AC’s built-in thermostat, which probably doesn’t go much lower than 65. I measured 40° air coming out of the unit, so with the right controller I could get down lower.

I do not know how efficient it is. When the cooler is in full swing I felt around all the likely places where cold might escape and only found one. I would like to purchase a watt-hour meter to see how much electricity this thing needs. The total cost of the cooler comes in at around $380 for materials; my time is more precious, but who’s counting?

The cooler appears to be ready for a maiden fermentation, but I have not decided what to make. There is space for two 15-gallon fermenters and four corny kegs, so I have the capacity to make a respectable amount of beer.