Yesterday the eye of hurricane Ike passed 85 kilometers westward of my house in Bryan, TX. It caused no damage to speak of here. Our neighbors lost a tree, but after Adrienne and I helped him cut it down we waited out the storm with some spicy barley soup and laptops. We did not lose power or water like Galveston and wish a speedy recovery to them.

Today was brew-day. I had a crisp rye ale lined up from Austin Homebrew Supply and a starter of Wyeast 1968 ready to go. AHS advertised this recipe being similar to Real Ale’s Full Moon Pale Rye, which I like. Bear Republic makes a great rye IPA and I would like to explore brewing with rye malt. 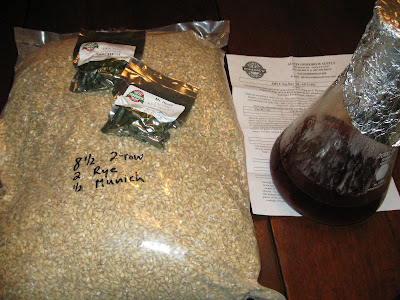 Had a few friends over to help share some (commercial) beer. The brew went by in a typical way. My efficiency is often quite low (50% today) so I topped off the recipe with a kilogram of dry malt extract. I got about 45 liters out of it which indicates that I sparge too much. OG was 12.8% brix with 41-ish IBUs. The recipe: 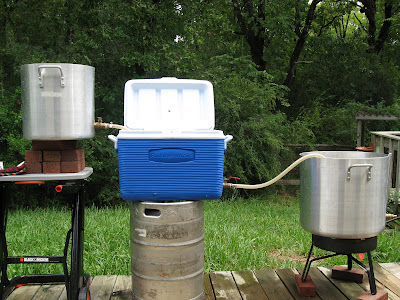 I boiled for 30 minutes before adding the Mt Hood trying to get my volume down and gravity up. The wort has a nice sweetness to it, but I do not taste much rye. Chilling the wort is still a problem as I can only get down to about 32° C. When I put together a stand for my equipment I will make space for a pre-chiller. However, the brew is now fermenting in the duck-in cooler I made. 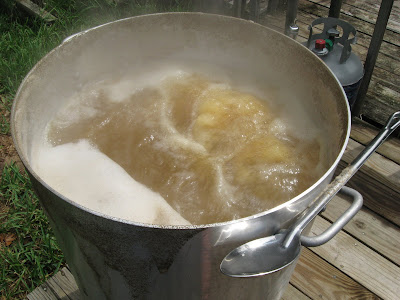 4 thoughts on “Rye of the Hurricane”