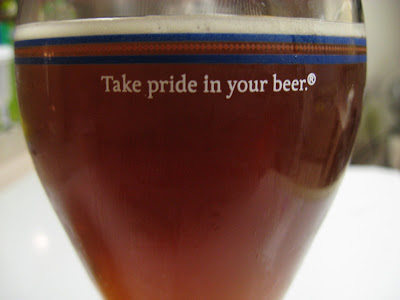 This beer is delicious. I already have ingredients to make it again. Soon. It’s almost out.

Previously I made it without crystal 120, but that malt adds great body and plum/raisin maltiness. While it is full-bodied the beer is not heavy. Traditional British hops give it a earthy, muddied bitterness leading into a spicy rye and Hallertau kick. The finish is peppery, slightly sweet and just a little thick on the tongue. I want more.

I really appreciate the ability to do multi-step mashes my new system gives me. For this beer I rested 20 mins at 150° F and 40 mins at 163° F which developed that full body while lending enough fermentables to the wort. The gravity settled at 1.017.

As difficult as it is, an extra few weeks conditioning will do wonders. When I tapped it the dried fruit flavors had not developed, however near the end of the keg they come through and really make the beer stellar. I recommend leaving it alone for eight weeks after taking it out of primary. 8 weeks, I thought I waited long enough for this one….

2 thoughts on “Review: Rye of the Hurricane II”