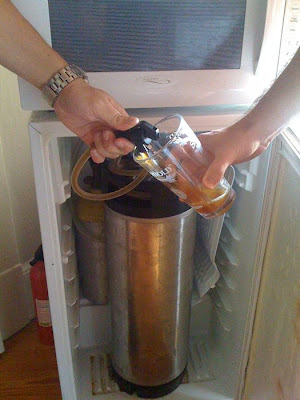 My wife Adrienne was in need of some design services for a logo and business cards for her consulting services. Happily a friend of mine, Roby Fitzhenry, works for a first-class graphic design studio: Always Creative. The three of us met over beers at Revolution Bar one evening to hash out a deal. He would provide some branding and design services and we would make beer and replace a toilet in the Creative Space where he and I share offices. Roby likes Newcastle Brown so I started looking for recipes for a similar beer.

I found one in Graham Wheeler & Roger Protz’s book Brew Classic European Beers At Home. This 180-page book is full of clone recipes from European breweries. Notable recipes include Fuller’s ESB, Heller’s Kölsch and Jenlain Bière de Garde. The book was a gift from my early brewing days and I do not often page through it. This time I was glad I owned it. On the Newcastle Brown ale clone page the authors write:

Newcastle Brown is a blend of two beers, a strong “vatted” ale and a weaker beer. The strong beer is matured in maturation tanks for a period of time and this is blended with a weaker and probably younger beer of OG 1030; the final blend having an OG of about 1045. Unique flavor characteristics that are only developed during the maturation of strong beers are then imparted to the strong beer, producing a full flavored beer for its gravity.

At their suggestion I brewed 5 gallons of OG 1.075 beer, blending it four weeks later with 10 gallons of OG 1.030 beer. This beer fermented and conditioned for a further three weeks to be put under pressure today. I have not taken a critical analysis of it yet, however Roby calls it “Fucking Delicious Ale” after he tasted it lukewarm and undercarbonated. Here’s a pic of him trying to fit a cornie keg in his laptop bag to take home: 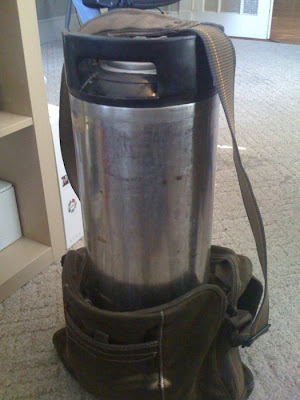 I will reproduce the single-batch recipe Wheeler and Protz provide, modified to fit ingredients I had on hand, and explain how they suggest splitting the batch.

To make strong and week beers to blend, multiply the ingredients by 1.7 and 0.68 respectively. Blend one part strong with two parts weak. It was easiest to scale the recipe to 15 gallons, brewing 5 gallons strong with 10 gallons weak. I only promised 10 gallons to Roby so I get to keep 5 gallons for myself.

My brewery lacks a 15 gallon fermenter. A fellow brewer graciously loaned me a carboy so I could ferment the beer in three vessels. Upon kegging the beer I thought I noticed a flavor difference among the fermenters. I had my wife give me a triangle test and could pick the odd-beer-out. One was slightly maltier, but not significantly different. These beers were virtually identical and kept in identical environments, with few factors accounting for the flavor differences. This bolsters similar anecdotal evidence I found in my last split batch. Pitching rates matter.