Read from the bottom up: 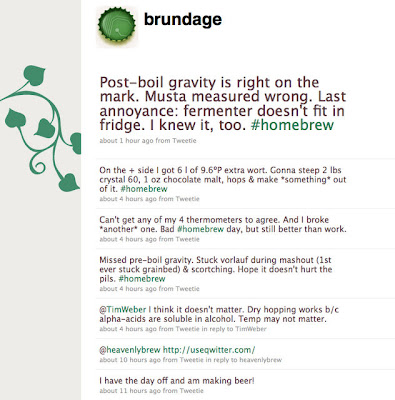 Today I brewed The Domestic for a second time. It is a Classic American Pilsner, also called a Pre-Prohibition Lager. The recipe is from Jamil Zainasheff’s book Brewing Classic Styles.

I recently started doing a mash-out and this is my second brew session doing so. Combined with a slow sparge, I saw improved efficiency the first time. Today I ran into problems.

My mash tun is direct-fired and I recirculate the wort to prevent scorching. During vorlauf today my flow rate slowed to a trickle. Most of the time the March pump loses prime and I goose it a little to get it going again. When that didn’t work I stirred the grainbed and restarted the vorlauf. None of the usual tricks got the wort flowing again. But this was no ordinary problem. 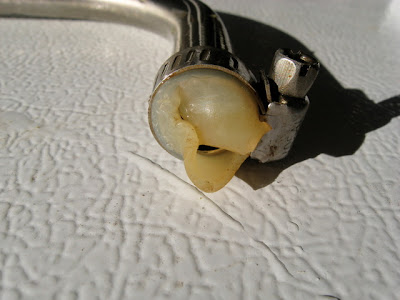 That piece of hose pokes through the mash tun’s false bottom, acting as the pick-up. Heat from the burner melted it partially closed. Wort in the bottom of my tun scorched from lack of movement. 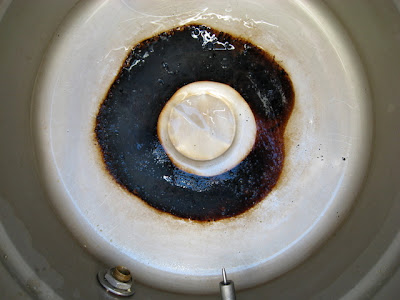 The sparge marched onward and I collected 11.5 gallons of sweet wort. I measured the gravity at 9.6º Plato, or 1.038. At that strength my post-boil gravity comes out to 1.043; 7 points too low. Reducing the volume to hit the gravity posed two problems. First, the style demands a light-colored beer and a prolonged boil would darken it too much. Secondly, the first hops were in the kettle and would throw off the bitterness balance. I cursed a little, tweeted then pushed on.

Ninety minutes later the brew was boiled then chilled and in the fermenter. When I lowered it into the converted chest freezer the bulges of the keg would not fit. Previously, I had tried to put the keg in the freezer with the same result, so I should have known. I grumbled a little. 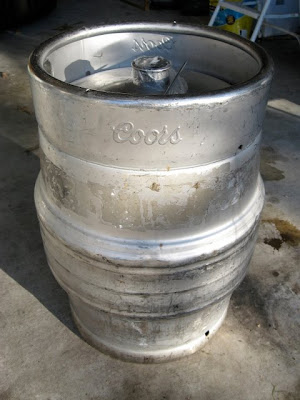 It is now in my ale fermentation cooler, turned up to full blast cooling. When it comes time to lager this baby, I’ll split it into two carboys and put them in the freezer. Notice I hit my target starting gravity of 12.5º B.

After collecting the desired pre-boil volume I became curious how much wort I had left in the mash. Opening the spigot on the tun I dumped 6 liters of 9.6º B pale sweet wort into a bucket. With everything that went wrong today I was not about to waste so much potential beer.

Looking at my grain store, I picked an additional 2 lbs Crystal 60ºL and one ounce of chocolate malt. Approximating the recipe gives this:

Post-boil volume would be less than a gallon 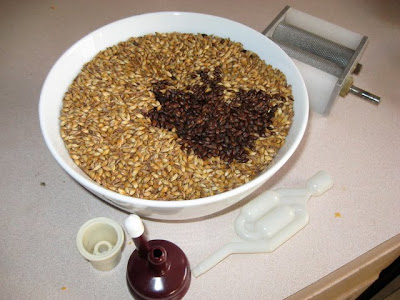 The final gravity turned out to be 25.2º P (1.107). It will probably be an Imperial Stout-ish. The yeast is a German ale/kölsh strain coming right out of an Altbier I put into lager tonight. Hope it can handle high gravity.

As an aside, I am quite fond of the brew-in-a-bag method those Aussies invented. Tonight’s second brew session was essentially that. 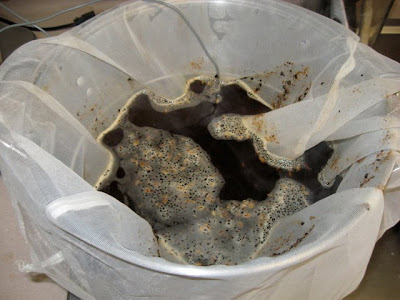 4 thoughts on “The Domestic & Something Else”