Last Friday, minutes before leaving for a beer-judging weekend trip to Oakland, CA, I kegged this year’s Gnarly Barleywine. Even though it has been four years since the first and last time I made this barleywine, I call it “this year’s” barleywine because it is a good enough recipe that I would like to make it yearly. Brewed on May 6th, this beer’s beginnings reach back another two weeks to a 10-gallon batch of Bitter I made as a yeast starter for the barleywine.

As I write this article, I sip the Starter Bitter. It’s an ordinary bitter on the very low end of the SG range and the very high end of the IBU bracket. That combination of attributes makes for a bad beer. The bitterness is sharp and harsh and the body is thin. Adding calcium sulfate to RO water is about the only way to “fix” my tap water, but I think I overdid it this time. Sulfur compounds accentuate harsh bitterness. It is carbonic and metallic and a healthy dose of malt flavor would really bring this beer from the brink of disaster. The bouquet has some malt sweetness, but lacks hop aroma. Pardon me while I take another draught. Next time, five more pounds of Maris Ottr. The recipe:

A better mash program will probably help the malt profile. 149° F is at the top end of beta-amylase’s temperature range, but below alpha-amylase. Beta makes fermentable sugars and alpha makes unfermentables. As John Palmer writes: “A lower mash temperature, less than or equal to 150°F, yields a thinner bodied, drier beer.” That is exactly what I have; more malt please.

I should also note that higher fermentation temperatures will produce more of the British ester compounds that are missing from this beer.

The low starting gravity sure makes for a low-alcohol session beer. Pardon me while I pour another pint.

Moving along, the starter bitter fermented out and I transferred it to kegs. Onto the yeast cake I dumped 5 gallons of New Gnarly Barleywine:

I was in a rush to get to the airport for this weekend’s Longshot competition, therefore I did not get a proper taste on the way to the keg, nor did I add the dry-hops. Adding them will give me an opportunity to have a proper taste test.

Longshot was great, as usual. This marks my third year judging at the competition and reinforced my appreciation for the Boston Beer Company. My report from 2007 will give you an idea of what it’s like. Incidentally, the best in show in our region went to a barleywine.

22 beers waiting to be judged best in show. The dude on the right is Pete Solsberg of Wicked Ale and gourmet chocolate fame. Real approachable guy – as are most brewers.

The Bitter has been on tap for about three weeks now and I am five gallons down. Here is a little post about it so far.

Some problems, and their solutions:

San Jose uses chloramine in its water and I did not filter my water prior to brewing. Chloramine is becoming preferable to chlorine because it does not dissipate in the system. It is that property that carries it through the brewing process.

Roger, who brewed along side me at the brew-in, had the same problem in his IPA and suggested that I de-gas the beer a few times. After the beer was carbonated, I opened the top vent until it stopped hissing, then allowed it to carbonate over a few days. Repeat as necessary. This will also carry out some of the flavor you want to keep, but it is a small price to pay for drinkable beer.

I have another five gallons still in carboy – interested to see if the off-flavors are still there.

Before I leave, I feel compelled to give you a little BJCP-style judging of it. The keg is nearly empty and I want to bring a half a gallon to a friend’s house tonight, so here is the evaluation from memory:

Aroma: No hop aroma, all malt and a hint of alcohol warmth.

Flavor: Full malt flavor with a residual bitterness level. Bitterness is low, skimming the bottom of the expected magnitude. There is a noticeable alcohol warmth and some off-flavor that my inexperienced palate can’t identify. Maybe it’s just the “homebrew flavor”.

Overall: Drinkable, as evidenced by the short turn-around time on the keg. Not my best, but a welcome beer none-the-less. 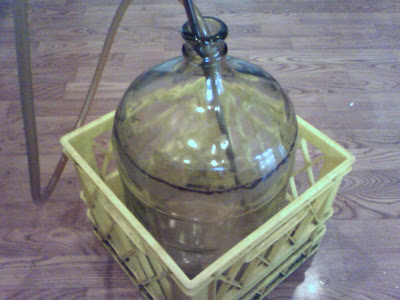 Friday I emptied 5 gallons of the newest beer into a keg. It’s been under pressure for two days now, and I just put it into the serving fridge. It is slightly under-hopped and a little too malty, but it should be a decent beer. Admittedly, I tasted it warm, in a frozen mug, so the flavor will be different tomorrow when it’s cellar temperature.

Final gravity was around 8° Bx (1.015 SG), putting it at about 5.5% ABV – too high to be a session beer. Guess it is a Strong Bitter rather than an Ordinary Bitter.

Glad it will be ready for Independence Day.

Yesterday, the Sudzers held a brew-in at Beer & Winemakers, a local homebrew shop. It is a chance to get together with club members and show off your brewery. If you have read some of my previous posts you will know that my brewery is in transition from average-homebrew-size to double-homebrew-size. I have the big pieces of equipment, but not the stuff to efficiently connect the individual vessels. Despite this, and in defiance of previous infections, I packed most of my brewery into the car – resolute to make a full batch.

In order to take advantage of my shiny new counter-flow chiller and false bottom for my kettle, I needed to stop off at the hardware store. There I picked up some copper fittings and hose clamps to connect the kettle and CFC. Since it has been ten years since I last soldered copper, I hoped someone among the brewers there could refresh my memory. The beer path of my chiller was also a little tweaked from a storage accident and I feared the fittings might not set into place properly.

I arrived 20 minutes after the prescribed start to find only Roger St. Dennis set up and mashing. Always jovial, he greeted me and pointed to where I could set up. I was thankful to have a spot near the shade – the previous week was hot and sunny. There were customers, mostly neophyte brewers, checking out our equipment and asking questions about the process. I poured a beer from the jockey box.

Despite being determined to make beer that day, I did not have a recipe. I am beginning a search for a stellar bitter recipe and the owner at B&WM helped me get a start. Off the top of his head, he recommended these ingredients:

I choose White Labs Dry English Ale yeast and the hopping schedule. I poured a beer from the jockey box.

He erred towards the malty side, but even with my brewery’s 68% efficiency that put the OG -about 1.056 – well above range for an ordinary bitter. I could have used half the fermentables and come out at the low end of the gravity range. Not to worry – I like big beers too.

I heated 9 gallons of strike water to about 160° F and mashed in. The only thermometer I brought that day had a tiny dial, so these readings are approximate. I hit around 155° F for my sacc rest and called it good. I poured a beer from the jockey box. While the hot water did its thing, I chatted with customers and set about other brew-day tasks.

Since my 15-gallon fermenter does not travel well, I resorted to two dirty 5-gallon glass fermenters. Cleaning those bottle-necked vessles is a real pain in the ass, but PBW worked well for me. Another beer from the jockey-box. Many people asked questions and I was happy to explain the whole brewing process.

Even with the extra distractions, I remembered to heat up some sparge water in time for mash-out. My crappy software recommended 8 gallons sparge water, but I only brought a 5-gallon HLT. I decided to make due and heat two batches of water to get the correct volume. The first was ready on time and the second shortly afterwards. The brew-day was quickly progressing. I poured a beer from the jockey box.

While waiting for the kettle to boil, I talked with a machinist about how to best handle my bent chiller outlet. We decided that it would be best to shove a hose way up onto a more sturdy part of the outlet and clamp it down. This worked and I was able to solder a hose-barb on to the other end; ugly, but water-tight. I poured a beer from the jockey box. 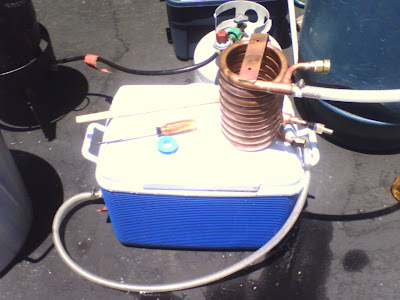 Hops were added according to schedule and fermenters were sanitized in time. The new chiller worked superbly and I employed ye ol’ shake the fermenter for aeration trick. 30 minutes later, my equipment was clean and put away in the car. The bar-b-que was going and I relaxed until my brew-day buzz wore off before driving home.

Twenty-four hours later, one fermenter is running and the other is just picking up steam. (I think one got more O2 than the other.) I have a crawl-space that maintains about 70° F which should produce a fruity ale. I will report on the process as newsworthy events develop. 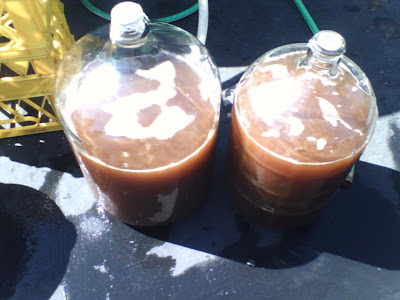